"Right, wrong... Nobody's got a clue what the difference is in this town. So I'm gonna have more fun... and live crazier than any of 'em."

Goro Majima is a recurring supporting character in the Yakuza series and one of the main playable protagonists of Yakuza 0 and Yakuza: Dead Souls, as well as the Majima Saga of Yakuza Kiwami 2. His ferocity in battle earned him the nickname "The Mad Dog of Shimano". He is the patriarch of the Majima Family, president of Majima Construction, chief advisor to the sixth chairman of the Tojo Clan, as well as the former vice chairman of the Tojo Clan.

Majima is a resourceful, charismatic, and commanding individual. He has gained the respect of friend and foe alike, often with his ferocious abilities in battle. Despite being the patriarch of his own family - and later, lieutenant advisor to the sixth chairman - he dislikes serious meetings and often finds a way to showily barge his way into them. He is shown to have a soft spot for his family members - even if he is prone to physically punishing them for their disobedience. He has a fierce, somewhat twisted sense of loyalty. He respects physical power above all else.

Majima commonly reminds others that he has standards to uphold as a yakuza, despite his theatrically unhinged persona, and states that he dislikes dishonorable men, especially ones that intentionally break rules. He is shown to go out of his way to help civilians that are put in danger by yakuza affairs, specifically women and children, who he has a soft spot for.

Occasionally his sense of self preservation will win over his need to do the right thing, and he is not above turning a blind eye to the suffering of others. If there is a chance that something will cause problems for himself or anyone close to him, he will not hesitate to throw others under the bus.

His "Mad Dog" act is primarily inspired by three men - three paragons of the "tenacity" that he wishes to embody; living for the thrill, using his strength to protect the ones he loves, and being "damn near immortal." He vows to "have more fun and live crazier than any of 'em."

He is polite and respectful by nature to civilians and to his superiors, and is surprisingly pragmatic, all three of which made him a fantastic businessman throughout his life, as shown by his success with The Grand and Club Sunshine, and later his construction company, Majima Construction. This also leads him to being favored by his superiors, sometimes against his will.

Majima loves baseball, and considers it a bonding activity. He is called sentimental, is shown to hold on very closely to the past, and never forgets a promise. He is loyal to a fault and will put anyone that he cares about above himself.

I am too embarrassed to talk about my feelings for Majima here, so instead I will show this Discord message. I had just woken up from oral surgery (having all four of my wisdom teeth removed) and the one thing I wanted to talk about while I was high and could barely type before I passed out was Majima. Thinking about Majima's emotional and physical strength was what kept me from hyperventilating as they were preparing me for surgery 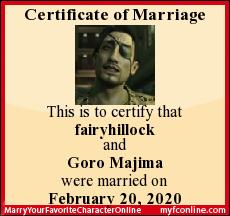